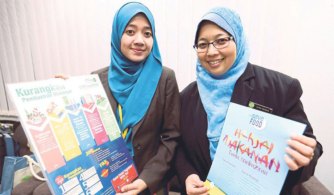 In the last five decades, Malaysia has experienced a rapid structural transformation, shifting from a predominantly pre-industrial agro-based society to a thriving economy with diverse sectors and industries. The ensuing economic growth has remained consistent, enhancing living standards – with mean monthly household expenditures for Malaysians increasing from 877 USD in 2014 to USD 989 in 2016, a nominal growth rate of 6 percent per annum according to Malaysia’s Department of Statistics. Residents also enjoy the third highest GDP per capita in ASEAN Region, behind the high-income countries of Singapore and the Kingdom of Brunei.

However, Malaysia’s meteoric rise and the unique challenges it faces are symbolic of many formerly pre-industrial nations in transition. As disposable incomes surge, so do worrying levels of overconsumption and waste. Government agencies are actively monitoring the status of waste production in the country, especially as it relates to food. In 2016, the State determined that 15 000 tonnes of organic waste is produced daily, 3000 tonnes of which was estimated to be food fit for human consumption. Annually, that food waste translates to almost 1.1 million tonnes, on par, for population size, with smaller European countries. SAVE FOOD spoke recently with Dr Ainu Husna M S Suhaimi, Deputy Director, International Networking Program Corporate Communication and Quality Centre, Malaysian Agricultural Research and Development Institute (MARDI) who is also the head of MYSaveFood Secretariat in Malaysia. MARDI received a grant from FAO to develop a food loss and waste reduction project and in early 2016, MY or Malaysia Save Food was born. Since getting off the ground, MYSaveFood launched a national communication campaign targeted to consumers across a broad cross-section of society, including ministries, organisations, households and in schools.

SAVE FOOD: Malaysia’s food waste challenge rings true for many higher middle-income countries across the world. What impacts do you think incomes have on attitudes to food?

Dr Ainu Husna  Malaysia is a thriving society and while still face some developmental hurdles, but poverty rates are relatively low and incomes are rising. Consequently, when this happens and populations become more urbanised and have more buying power, they see food as less of a necessity and more of a leisure commodity. Furthermore, any celebration in Malaysia tends to be associated with food. The relatively cheap cost of street food and the proliferation of eating out are also driving food waste, not only in Malaysia but the Asian continent in general.

SAVE FOOD: We recently spoke with the food redistribution group Feeding India on the impact of cultural practices in event management on food waste. One of the main takeaways was how food often acts as a status symbol – the more plentiful and diverse, the wealthier a person is presumed to be. Is this similar to the Malaysian context?

Dr Ainu Husna: The correlation exists. However, concerning social status, the focus is on the quality of food, not quantity. For example, a wealthy person would likely host events at a restaurant or hotel, instead of in their home. At these establishments, food is of higher quality, but portions do tend to be much smaller. For middle or working class Malaysians, this is an emotional issue tied to the idea of respect – respect for guests, one’s family members or other members of the community. Malaysians are very hospitable people and take pride in being able to satisfy. As such, it is considered somewhat inadequate if there is not enough food to feed guests at an event or even a simple family dinner. To avoid this, people tend to over prepare out of fear of not having enough food. Naturally, the over preparation leads to significant food waste or food surplus, particularly at events.

SAVE FOOD: Your project has developed gripping, highly creative content to help change attitudes to food waste – mainby showcasing the value of food and agriculture. What are some of the core challenges in getting the message of food waste reduction to resonate with people, and consequently for them to change their habits?

Dr Ainu Husna: Changing attitudes is quite challenging and requires a long-term adaptive strategy. The current narrative around the value of food, that food is this infinite resource, is profoundly entrenched in our society but not insurmountable, particularly when we target younger segments of the population. However, everyone has to challenge the idea of the “value-less state” of food, not just not just through projects like MySaveFood or agencies like MARDI but through a vast network of partnerships – including partners in the private sector. One of our key messages around the value of food is that food is extremely difficult to produce. We have found that linking food to agricultural production, i.e. the time and labour invested into a crop by a farmer is far more effective than direct appeals to guilt or comparisons to the number of hungry people in the world and so forth. We also deliver the economic message – saving food is saving money. With food bills a significant portion of most Malaysian’s expenses, it is a powerful message.

SAVE FOOD: What would you consider some of your core successes since starting MySaveFood?

Dr Ainu Husna: On the organisational side, we worked with FAO and a few core partners very closely to create a sustainable network which now has more than 100 partners, both organizations and individuals. This includes government ministries and agencies, private companies, social enterprises and societies. We are happy that the Malaysian Chief Secretary launched the “MYSaveFood ways for government employees” to encourage more cooperation and initiatives. We are currently developing technical working groups to focus on issues faced by the specific sectors i.e.: production, processing, distribution consumer and waste management.

MySaveFood has also received a lot of traction. We held a forum in 2015, which garnered significant media attention – the press was shocked by the statistics and the coverage was very encouraging.

However, my team is most proud of the work we have managed to do with young people, their re-education to be less wasteful. In addition to teaching about the food systems and the dynamics of food waste and food loss, we also teach young people of a variety of ages agrifood skills – how to plant, in addition to meal planning and the tasty preparation of vegetables. We also teach youth about composting and work with the Ministry of Health to link these issues to healthy eating.

MySaveFood also receives a lot of support from private companies to undertake awareness raising on food loss and waste in schools. The response from children, particularly in the urban areas, has been phenomenal.
Furthermore, the general impact of MySaveFood has been significant. The profile of the issue has risen to prominence since we started the programme. More NGOs are now working to address food loss and waste, and we are witnessing more and more companies and agencies picking up that idea than ever before.

SAVE FOOD: What are the next steps for My Save Food?

Dr Ainu Husna: Building awareness of food loss and waste may not always translate into actions. The next step forward is to better structure the Network and to measure the food loss and waste across the supply chain. If we know where the most waste is, then we can develop impactful policies.